Musical duo of singer/songwriter and fiddler 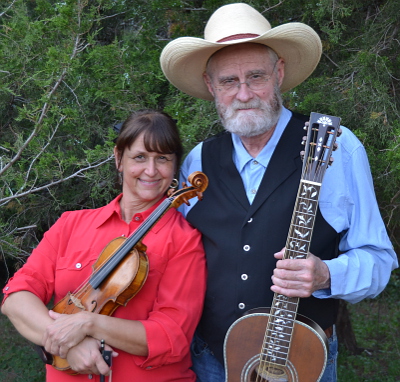 Allan Chapman was raised in West Texas on a cattle ranch his great-grandfather started in 1882. When he was 9 months old, the story goes, he grabbed the big Philco radio in the living room and pulled himself up to stand so he could stomp his feet and sing along.

Allan is a three-time Grammy nominee, winner of the American Song Festival, a Clio winner, nominated for Song Of The Year by the Academy of Western Artists and The Western Music Association — with songwriting credits going back thirty-plus years for performers like The Oak Ridge Boys, Kenny Rogers, Diana Ross, George Jones, Sandy Posey and numerous international recording artists. He won the bronze Song of the Year at the Woodyfest Song Festival for "Winds of the Borderland," and in 2017 with Jim Jones he won the Western Writers of America, Western Song of the Year Spur Award.

Allan has been writing and producing music most of his adult life. A former college English literature teacher, Allan gave that up "to run away and join the music circus" writing songs in Nashville, New York City, and Los Angeles. In the 1980s Allan returned to Texas and the ranching life he loved. He married Rodeo Kate in November of 2000 and they have been making music together since then.

Rodeo Kate was raised in northern Utah, around cattle and horse people. She tried her hand at high school rodeo but quickly learned her place was with a fiddle in her hand.

Katie is a talented fiddler who also plays viola and cello. She has been nominated many times for Instrumentalist of the year with the International Western Music Association. In 2005 she was the first women to win that award.

Katie has played for many different performing groups such as K.G. and the Ranger, The Daughters of the Purple Sage, The Texas Trailhands, and of course, The Dinosaur Cowboys, with her husband Allan Chapman.

Katie loves music and she loves to write. She is working to publish her first children's picture book. The working title is A Goat for Katie.

In her spare time she teaches orchestra in Arlington Texas and raises a nationally-recognized herd of dairy goats. Katie married Allan in November of 2000 and they have been making music together since then.

Katie and Allan live in Wise County Texas with three dogs, two cats and way too many hooved animals.