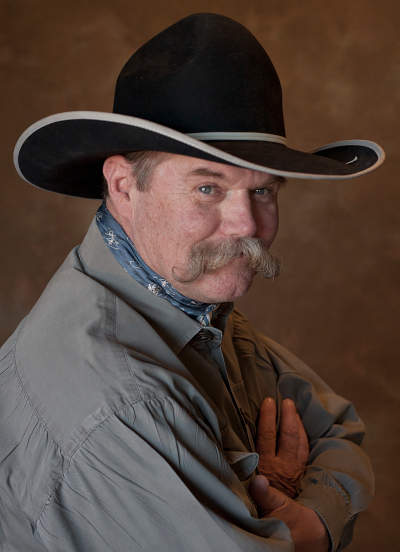 "I can't ever remember 'finding' cowboy poetry," Waddie Mitchell says of the entertaining and enduring art of storytelling. ""It was always there. The cowboys sure never called it poetry. I know I wouldn't have liked it if they would have. Seems like an oxymoron, don't it!?"

Born on a ranch in Elko County, Nevada, Bruce Douglas Mitchell dropped out of school at sixteen and went to work as a cowboy until he was drafted into the Army. Stationed at Fort Carson, Colorado, Mitchell broke and trained horses for the U.S. Cavalry. It was in the army that his nickname "Waddie"—a regular old cowboy—stuck to him.

After he came back to Nevada, Mitchell started working on big ranches, got married, and established a family, raising five children. After the popularity of the first Cowboy Poetry Gathering in Elko in 1985 — of which he was one of the founders — he realized the impact he had on audiences. He also saw that making day wages as a cowboy, he would never buy the ranch he dreamed of owning. So Mitchell became a professional cowboy poet and entertainer with worldwide tours, logging over 200 days on the road in 2006.

In 1997, Mitchell was finally able to purchase a ranch in the foothills of the Ruby Mountains he loves so well. His kids are grown and on their own, and he is building an off-the-grid ranch stead with his wife and partner, Lisa Hackett.

Mitchell continues to tour all over the country as a humorist, poet, and grassroots performer. He was central in founding the Working Ranch Cowboy Association, with a mission of creating scholarships and crisis funds for working cowboys and their families. The well-recognized and highly respected WRCA now sanctions numerous regional rodeos throughout the West with the sold-out world championships held each November in Amarillo, Texas.