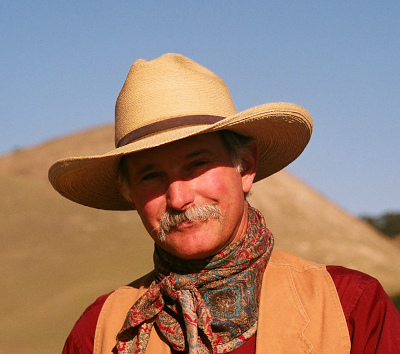 Dave Stamey  is a nationally-acclaimed cowboy singer/songwriter and entertainer and in 2016 was inducted into the Western Music Hall of Fame. He has been recognized 5 times by True West Magazine as the Best Living Solo Western Musician. Of all the many awards over his 25-year career, Dave was honored on April 13, 2019 at the National Cowboy & Western Heritage Museum with the Chester A. Reynolds Memorial Award — recognizing Dave as a true steward of western tradition and a darn fine singer/songwriter!

Western Horseman has declared his "Vaquero Song" to be one of the greatest Western songs of all time. Cowboys & Indians has called him "the Charlie Russell of Western Music."

Dave Stamey has been a cowboy, a mule packer, a dude wrangler, and is now one of the most popular Western entertainers working today.

In the midst of his fast-paced touring and performing schedule, Dave wrote and produced his 12th CD called Good Dog. His compositions on this new release are what you come to expect from Dave - witty, heart-wrenching, tender, and sophisticated. His very latest projects include 2 books. The First Twenty-Five Years, Songs and Stories was released in August 2018. With over 60 Dave Stamey originals and their backstories, one really begins to understand the depth of this songwriter and his creative process. In September 2021, Pigaroo and the Code of the West was released with a collection of Stamey short stories.

"It doesn't matter if you are a farmer, an electrician, deputy sheriff, horse shoer, own a tire dealership, or are an English major at Stanford, Davey will touch your heart through laughter and song."
— Baxter Black, author, poet, humorist, radio commentator

"If you haven't discovered him yet, it's time you broadened your horizons."
— Cowboys and Indians Magazine