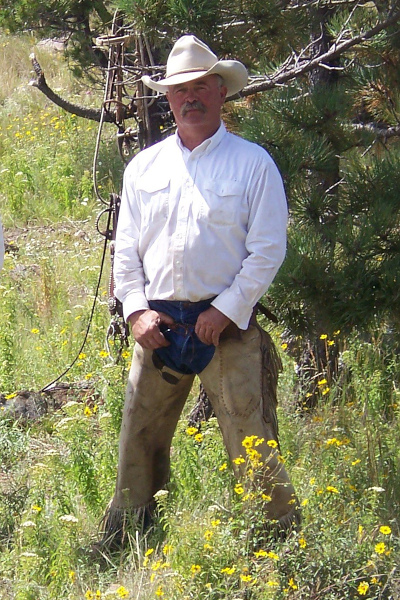 Ross grew up on a small cow/calf operation in Prineville, OR and always knew he wanted to be a cowboy. At the age of 16 he quit school and headed for Nevada to work on the big outfits. He cowboyed all over the western states for the next 15 years, working in Wyoming, Arizona, Nevada, Oregon, California, Texas, and Montana. He rode for the TS Ranch three different times under Darrell Munson, and at the age of 23 was the youngest jigger the MC Ranch had ever had.

Then he took a job packing mules with supplies to Phantom Ranch on the bottom of the Grand Canyon. Ross was head packer there for almost 17 years, and in that time logged more miles horseback than any other human being. They have him listed in the World Record books at over 50,000 miles on the canyon trails. He has worked at both the Grand Canyon and Saguaro National Parks in Arizona, packing in supplies and tools for trail and fire crews. Ross has also led pack trips in Yosemite. Since leaving home, he's drawn wages cowboying or packing.

At the age of 20, Ross began to write. Originally he wrote stories of his time in a MC cow camp and out on the Owyhee Desert. These pieces were never meant to be shared - just something to drive away the evening boredom. The first time he ever performed was at a storytelling festival in Reno, NV with Larry Schutte and Waddie Mitchell. Not long after that the National Cowboy Poetry Gathering in Elko was created, and Ross has performed at most of the annual events.

Known for reciting the classics, Ross also writes original poetry from his life experiences and has more than 100 poems committed to memory. He has also released a CD collaboration with musician Trinity Seely, The Horse in the Middle.

Ross and his wife, Lynne, now manage the Rancho De La Osa in Sasabe, Arizona and the Circle Bar Ranch in Hobson, Montana (depending on the season) for True Ranches. Ross still spends most everyday horseback, working cows, teaching guests about why we do things the way we do, and keeping those traditions alive for generations to come. Through his poetry and stories Ross gives people a chance to sit back and relive with him life on those desert ranches: the horses, dogs, and cowboys who helped shape him into the horseman he is today.