Jill Jones and the Jingle Bobs 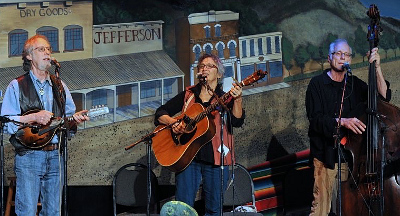 Jill was raised in the Texas Hill Country during the 1950s where she was given the run of the family horse ranch. These were carefree days with no helmets or seat belts. Jill was probably 10 years old before she realized that she was not actually a Comanche brave, although several of the horses might argue that. The adventure of those rough and tumble years shaped the rest of her life, that and the old f-hole arch top guitar she found in her father's closet. Even now, music and horses define who she is.

Bob Goldstein is a product of the folk scare of the 1960s. He began his career as a singer/songwriter, but got too much work playing guitar, mandolin, and banjo in bluegrass, swing, western/cowboy, and commercial country bands. He's backed such artists as Johnnie Gimble, Buddy Emmons, Byron Berline, Peter Rowan, Bill Hearne, and Lynn Anderson, and was a member of The Howard Brothers Band, The Ozone Express, Heartswing, The Laurie Gibson Band, The Sons of Rodan, Elliott's Ramblers, and Syd Masters and the Swing Riders, among others.

As a youth, Bob studied with the legendary Reverend Gary Davis, and later with jazz great Bruce Dunlop. Known as one of the best sidemen in the Southwest, Bob was nominated for instrumentalist of the year by the Western Music Association, and for Guitar Player of the Year by the Colorado Bluegrass Music Association.

Bassist Zeke Severson has performed gigs in New York City to parties in Yosemite. He comes from a musical family where his brothers and sisters were either organists at local churches or conducted the choirs. He started bass at 14 years old then moved to wind instruments in college but moved back to the bass when he moved to Santa Fe in 1983. He has played in local bands Funkuation, Ronny Gene and the Lighthouse, Michael Hearne and South by Southwest and Bill Hearne. Early influences vary from Herb Alpert to Doc Watson, Miles Davis to Willie Nelson.