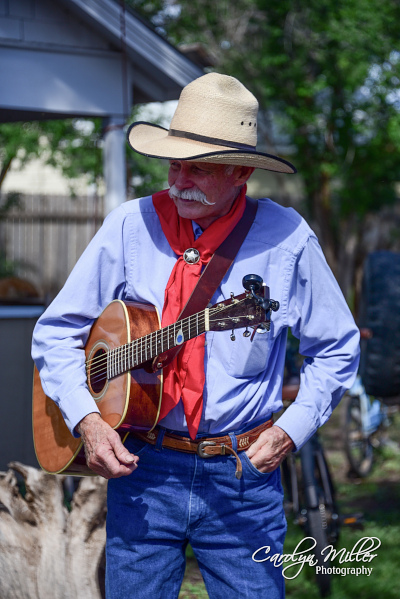 Glenn Moreland began playing the guitar around Austin, Texas in the late 60's. He listened to some of the musicians playing the old cowboy tunes and fell in love with them. He began playing the fiddle in college to learn the favorite songs of the cowhand. Working as a cowboy in West Texas, he added many songs to his repertoire, including some he wrote. He has been nominated by his peers as a performing musician to the Academy of Western Artists. He received the Heritage Award from the Texas Cowboy Gathering in Alpine, Texas in 2006.

His quick wit, wry humor, and knowledge of cowboy history make him a favorite performer. Sometimes solo and sometimes with his partner, Washtub Jerry, he has entertained over much of the Southwest, from Big Bend Ranch to cattle drives in New Mexico and Colorado. He has also performed for music festivals throughout Texas, New Mexico, Oklahoma, Arizona, and Colorado, and occasionally with his son, Doug Moreland.

Glenn lives and works in Fort Davis, Texas with his wife Patty. There he builds and restores wagons, buggies, and stagecoaches and has become a well-known wainwright as well as a chuckwagon cook.