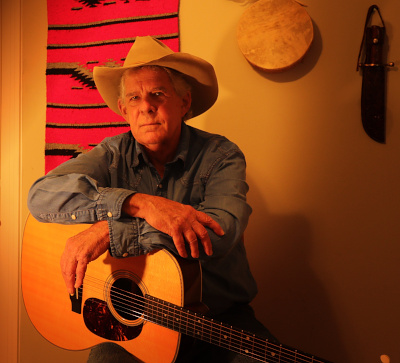 Bob Campbell is an award-winning Texas songwriter who also loves and performs the traditional old cowboy and folk ballads of Texas and the American West.

He has appeared at many national cowboy poetry gatherings throughout the west, including Alpine and the National Cowboy Poetry Gathering in Elko, Nevada. Twenty-three western artists have recorded Bob's songs, including Red Steagall, Chris LeDoux, and Buck Ramsey.

A huge influence on his life was his grandmother on his dad's side. She was born in 1878. Bob remembers her as a great storyteller and natural musician. "I still remember sitting by her side as a young boy, listening to her old ballads and tales of growing up on the edge of the Oklahoma Indian Territory—like the time Jesse James dropped in for the night."

Bob grew up helping his dad raise cattle on old family land outside of Marshall in the deep, rolling hills of Northeast Texas. He also grew up when cowboy movies were king on both the big and little screens. "I had a rich upbringing which imprinted upon me a lifelong love and respect for cowboys, horses, ranch life and the American west."

The cattle business is long gone, but today Bob and family are active in maintaining and improving a hay operation, overseeing a commercial timber operation, and trying to utilize the land in a responsible, productive way. "I draw strength and am deeply grateful each time I set foot on this land which stretches back four generations."

Bob holds a BA in journalism and for years wrote for newspapers and magazines. He served four years in the military during the Vietnam era, including a year in Southeast Asia. Bob also spent 10 years in Nashville, writing songs and serving as editor of Cashbox Magazine and editor of Country Music Magazine, a New York publication. Then he came back home to Texas for good and found his voice as a songwriter.

During a period as Artist-In-Residence with the Longview Arts-In-Education Program and the Texas Commission on the Arts, Bob conducted programs in elementary schools using old-time Texas songs and classic cowboy and old west songs and poetry as teaching tools. He recorded one children's album, Bob Campbell and Kids, Too!

Bob has also recorded one cassette album, Roll On, Cowboys and one CD, The Golden West.