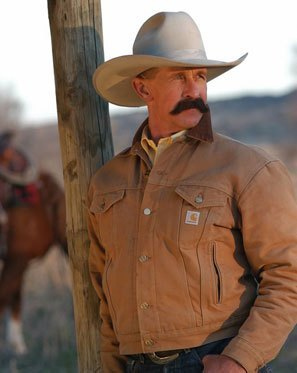 R.W. Hampton started as a cowboy with a summer wrangling job at Philmont Scout Ranch near Cimarron, New Mexico. After completing high school in Texas, he took at job at the Spade Ranch in New Mexico. From there he went to the IL Ranch of northern Nevada and then back to New Mexico and Texas. Although he relished life on the Canadian River ranches, he still had the urge to drift, which sent him to the ZX Ranch of the Oregon desert and then to the Pickerel Land and Cattle Company of Wyoming.

All the while R.W. played guitar and sang cowboy and western songs, an interest he had pursued since high school. On the ranches where he worked, he wrote songs based on his experiences. Most of the time he played and sang to entertain in bunkhouses and at roundup wagons, but periodically he was invited to sing in public.

In 1988, he decided to see if he could make a living playing music. Since then, he has released 14 albums including Ridin' The Dreamland Range, which received "Album of the Year" honors by the Academy of Western Artists in 1997. He was named "Outstanding Vocalist, Male" by the Western Music Association in 2010, and has been awarded "Male Vocalist of the Year" three times by the Academy of Western Artists. R.W. has performed all over the United States including The Grand Ole Opry in Nashville and in Washington, D.C. at The Smithsonian Institute.

Since 1985, he has appeared in thirteen movies, including Wild Horses, The Tracker, The Gambler III, and a documentary of the American cowboy.

One of R.W.'s most creative efforts is the one-man stage play, The Last Cowboy, written with his brother, Jeff, and playwright Dave Marquis in 1993. Set in the year 2025, R.W. plays an aging cowboy who recounts the history of the American cowboy through monologue and song.

R.W. currently lives with his wife and youngest children on their Clearview Ranch at the foot of the Sangre de Cristo Mountains south of Cimarron, New Mexico.

You can see R.W. in Keeping the Tradition Alive, our first film.