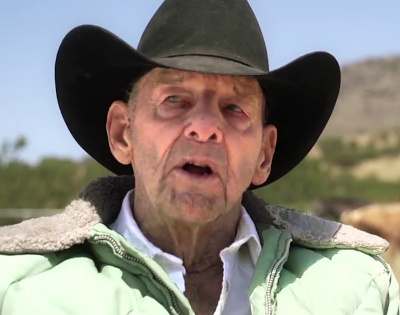 Ray Fitzgerald is a genuine human being, authentic cowboy, and loyal friend. Anyone who has had the privilege of sharing a campfire with this warm, knowledgeable, humble man or has been on a cow crew with him knows they have been in the presence of someone who has lived things that most people only read about in books or see in movies. He was born in Prineville, Oregon and raised on a ranch near Mitchell, Oregon. He has cowboyed from Oregon to Arizona and Texas.

He took a break from cowboying to serve in the United States Marine Corps, then spent 22 years with the U.S. Border Patrol in the Big Bend country of Texas, in the days when horses were used to a great extent and a man's tracking and cowboy skills served him well in staying alive and serving his country.

After retiring from the Border Patrol, Ray went back to cowboying and has worked for most of the big outfits around West Texas and the Big Bend, primarily the Kokernot outfit near Alpine, Texas. A real cowboy will instantly recognize that these poems were written by a man who lived what he writes about.

You can see Ray in The Legacy Lives On, our second film.